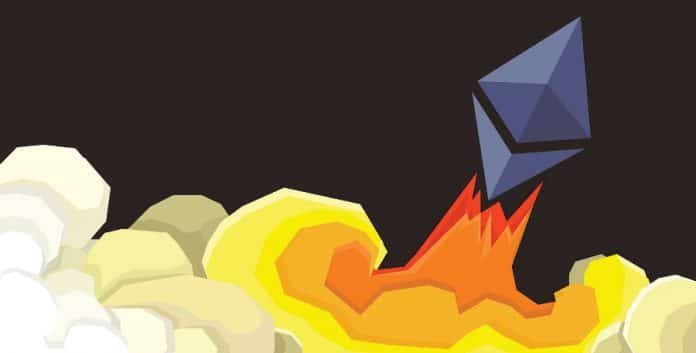 This article describes the origins and rise of Ethereum. The ups and downs in the journey of this blockchain make for interesting reading. Ethereum’s unique versatility is also covered.

The last two years have been literally a roller coaster ride for cryptocurrencies, with the boom and burst of entities from the USA to China. Bitcoin prices soaring to over US$ 16,000 prompted the world to take notice of the silently growing wave of technologies built on the concept of a blockchain. Top CEOs and consortiums of banks reversed their earlier reluctant stances and scrambled to create their own digital ledgers and cryptocurrency-inspired products. We saw tech companies strike deals to introduce their own crypto products with existing currencies, which then saw their valuations soar to heights only dreamt of before. It was a bubble that burst pretty quickly and many companies had to down the shutters on their cryptocurrencies. But others sustained themselves through this rise and fall, to a less volatile state.

On the bright side, this cycle led to widespread awareness and a general consensus on there being huge scope for maintaining a public ledger, as companies started investigating potential applications within their own technology stacks. This is when a 19-year old made waves in the community when he came up with the idea of expanding the technology underlying cryptocurrencies to support multi-faceted applications, based on blockchain’s system of consensus and public ledgers.

The history of Ethereum
Vitalik Buterin had been intrigued by the blockchain since he was 17 years old. He first got involved as a programmer with Bitcoin in 2011, and then went on to found Bitcoin Magazine. His interest culminated in the release of a white paper two years later, which served as the foundation of a technology he launched, called Ethereum. The name, as Buterin stated, came from a search of Wikipedia articles about elements and science fiction, following which he arrived at this term that included ‘ether’, the hypothetical invisible medium that permeates the universe.

The idea behind Ethereum was to reimagine the use cases for a blockchain, beyond just finance. Ethereum provided a platform for trading that went beyond the role of a plain old cryptocurrency by utilising the ‘smart contract’, a creation of this blockchain’s founders. Buterin and his co-founders launched a crowdsourcing campaign, under which they sold the participants Ether to raise funds to the tune of US$ 18 million. Armed with the funds and a solid vision, they first released Ethereum back in 2015. This first, barebones implementation was known as the Frontier. The platform saw considerable success and now has a widespread community working on it. One of the main selling points of this technology is that it offers support for generalised scripting and application development, without being limited to only financial applications. By virtue of its uniqueness, expansive reach and adoption rate, Ethereum has become one of the frontrunners of the blockchain revolution — driven by expanding potential applications and distributed consensus.

Ethereum’s long-term vision, as stated on its website, is to ‘decentralise the Internet’ and make it ‘the way it was supposed to be’. A smart contract is described by the site as “an application that runs exactly as programmed without downtime, censorship, fraud or third party interference.” The platform is built around the idea of smart contracts that allow anyone to write decentralised Web applications as long as they have a basic understanding of distributed consensus. This has opened the doors for various non-technical sections of society to benefit from finding their own uses for this marvellous technology.

The story of Ethereum includes interesting twists and turns. After the first implementation in 2015, it once again began as the decentralised autonomous organisation (DAO) that raised US$ 150 million in a crowd sale to fund the project in 2016. It then had to undergo a series of hard forks in order to reverse the robbery of US$ 50 million in Ether by a hacker, and subsequent attacks. Eventually, the team debloated the blockchain and added protection against DDoS attacks. However, this resulted in the creation of differing versions, including Ethereum (on the forked blockchain) and Ethereum Classic (on the original blockchain).

Major attacks
It is important to understand the flaws of cryptocurrencies if we are to truly estimate their potential to work in multi-faceted applications, at scale. One of the first major attacks on Ethereum was the result of a recursive call bug within the code that allowed users of the smart contract to withdraw twice the Ether they invested within the contract. It was brought to the developers’ notice but they claimed it was a known bug and no Ether was at risk. Unfortunately, they were mistaken and the platform was exploited by a hacker who went so far as to write an open letter claiming that the US$ 50 million he stole was legal and within the terms of the smart contract. He even threatened legal action should the Ethereum team attempt to reverse this transfer. Needless to say, the developers went ahead and created the first hard fork, reversing the loss of this money and allowing the affected investors to withdraw their original investment.

To understand how attackers tried to exploit the Ethereum platform, let’s take a closer look at the flaws in the setup. Much like your vehicles, the Ethereum virtual machine runs on gas, which is a fraction of an Ether and is used to make transactions on the Ethereum blockchain. Initially, some transactions on the platform cost very little gas. So little, that it opens the doors for exploitation, as I will explain now.

Flooding the network with low-cost, high-complexity transactions is one way of messing with the Ethereum blockchain. Other than introducing additional transactions, the blockchain is also bloated by adding in multiple empty accounts. An empty account can be created on Ethereum by transferring zero Ether to an address. Since the account has no smart contract code, no stored data, and no Ether to send to other accounts, it contains nothing of value. Yet, since a transaction was made to the account, the result of this is stored on the blockchain, increasing its size. This delays other transactions. Since a transaction is fairly cheap in gas, the hacker(s) took advantage of this to attack the blockchain and significantly bloat it. The Ethereum developers responded by taking measures aimed at debloating the blockchain, and introduced additional protections against DDoS threats.

According to BlockGeeks, the following key aspects of dApps need to be focused on, particularly in the light of their practical application in other domains:

1. Open source: The decentralised application should be made open to all scrutiny and governed by autonomy. Decisions on changes should be made by the consensus of a majority of the stakeholders.

2. Decentralised: Underscoring what the name dApp stands for, the records relating to transactions between two or more parties should be stored on a public ledger using the blockchain.
3. Incentives: Entities or individuals involved in validating the blockchain should be appropriately rewarded for their work. In most cases, this is done by offering them cryptographic tokens for the currency or the application in question.

4. Protocol: The network should agree on a cryptographic algorithm that shows the proof of value. For instance, the Bitcoin network follows the Proof of Work model, while Ethereum is slated to move towards Proof of Stake entirely.

Some areas in which dApps can drive a paradigm shift include healthcare, security, digital finance, politics, data storage and gambling. In fact, gambling is one of the top areas in which dApps are operating. Given that it is over a US$ 200 billion market, making gambling transparent might lead to some ‘game-changing’ new developments for players, particularly in the online arena that has not traditionally seen this level of openness in transactions.

The amount of fake news being generated is on the rise. Using the blockchain to verify the source of this news may well help identify bots and sources of misinformation that can otherwise influence large swathes of the populace before coming under scrutiny. Votes can also be registered via the blockchain, which could dramatically cut down on fake votes and even open up opportunities to transfer the voting process entirely online in a decade or two. This could tie in with the idea of each individual possessing a national digital identity. Being in charge of this publicly visible persona could reduce the chances of identity theft, since there is then a quick and concrete way to identify real ownership.

There have been a number of data leaks in the past few years across the technology sector, and in most cases this was due to insecure centralised systems of data storage. In contrast, introducing internal blockchains to store customer data might allow companies to transfer the processing to decentralised data stores, thereby reducing the damage from any single point of failure that attackers could exploit.

A number of different cryptocurrencies have actually used the Ethereum platform to launch their initial coin offerings. Clearly, there is huge potential for the technology and, as Ethereum states, ‘to create a decentralised Internet’. It remains to be seen where we go with the marvels this platform has to offer and whether it blossoms into a game-changer for the centralised infrastructure we rely on today, or gets forgotten as a has-been by-product of the dynamic world of technology.