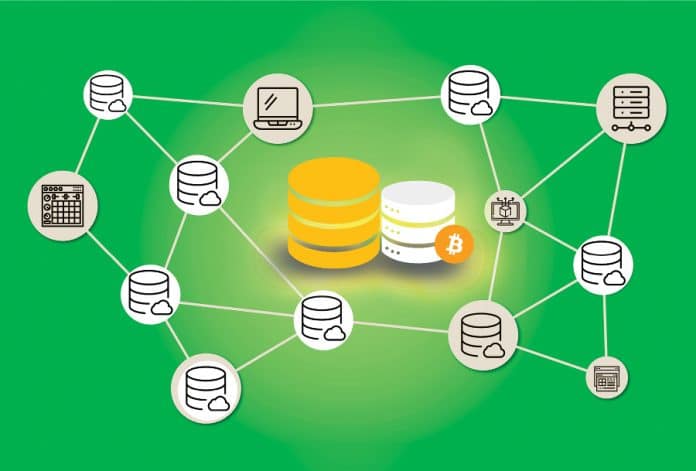 Blockchain technology offers decentralised control, where no one has any ownership or control
over the network; and a tamper-proof environment, where nothing gets deleted from network storage. It also has the ability to create and transfer assets on the network without reliance on a central entity. Blockchain storage, however, requires a powerful database, and this is where BigchainDB comes in.

As single monolithic blockchain technologies now have a wide range of applications, they have been re-framed and refactored into building blocks at four levels of the stack:

Blockchain storage requires a powerful database, and the traditional blockchain as a database (DB) is pathetic, as the throughput is just a few transactions per second (tps), latency before a single confirmed write is 10 minutes, and the capacity is a few dozen gigabytes. Also, adding new nodes causes problems in terms of network traffic, congestion, latency, throughput and capacity. As compared to traditional databases, a modern distributed database provides throughput exceeding 1 million tps, 1000 TB storage, latency that is a fraction of a second, with no effect on throughput and latency when increasing the number of nodes. In addition, modern databases have good capabilities for insertion, querying, access control and security.

In this article, we introduce the concept of BigchainDB, which is used for database-style decentralised storage.

BigchainDB
BigchainDB allows developers and enterprises to deploy blockchain proof-of-concepts, platforms and applications with a scalable blockchain database. It supports a wide range of industries and use cases, from identity and intellectual property to supply chains, energy, IoT and financial ecosystems — all without sacrificing scale, security or performance. With high throughput, sub-second latency and powerful crypto-condition escrow functionality to automate release-of-assets, BigchainDB looks, acts and feels like a database but has core blockchain characteristics that enterprises want.

As compared to Ethereum, Hyperledger or other blockchain systems, BigchainDB doesn’t build a full stack of blockchain technologies, but rather, offers an overlay onto existing database technologies to ‘blockchain-ify’ them. BigchainDB is designed to merge the best of the database and blockchain worlds — scale and querying from the database side; and decentralisation, immutability and assets from the blockchain side. It starts with an initial open source database, i.e., MongoDB, and adds blockchain characteristics including decentralised control, immutability, and the creation and movement of digital assets. BigchainDB easily accommodates 1 million transactions per second, and explicitly excludes having a virtual machine or other mechanism for running smart contracts.
The following are the three main characteristics of BigchainDB.

There are several kinds of nodes:

Transactions in BigchainDB
The BigchainDB framework makes use of the consensus of the used database cluster. It is also possible for the end users to make their own validation mechanism, to validate the transactions in the blockchain network.
Basically, two types of transactions are available in BigchainDB, i.e., CREATE and TRANSFER. CREATE transactions create an asset, i.e., a collection of data and link it to at least one owner — its public key. In addition, all assets are ‘divisible’ and can therefore be broken down into different proportions for different owners. In a CREATE transaction, there is no previous owner. So an input in a CREATE transaction simply specifies who the person is who is registering the object (this is usually the same as the initial owner of the asset).
An asset can represent any physical or digital object. It can be a car or a house, or it can be a digital object like a customer order or an air mile. An asset can have one or multiple owners, but it can also be its own owner.
An asset can be many different things, such as:

With TRANSFER transactions, complex instructions can be created that link existing assets (and their shares) to conditions of further transactions. In this way, assets and parts of the network can be easily moved between subscribers in the network. As is usual in a blockchain, there is no way to delete an asset or modify its properties.

Conditions for transactions
For a transaction to be validly processed in the network, several conditions must be met.
Once the transaction has been received, the nodes check it for the correct structure. For example, CREATE transactions must contain their asset data while TRANSFER transactions reference the ID of an asset created. Both types also differ in the way they have to deal with inputs and outputs. Of course, each transaction must be signed and hashed before it is transmitted to the network.

If the structure of a transaction is valid, the validity of the contained data is checked. In short, ‘double spending’ is prevented in this step. This prevents the transaction from repeatedly transferring the same asset or issuing assets that have already been issued in other transactions.
In addition, you can implement your own validation mechanisms that could check asset generation and transfers for correct functionality — for example, whether realistic dimensions have been assigned to a car part or whether the colour code of an automotive paint job exists.

Differences between Hyperledger Fabric and BigchainDB
BigchainDB is a blockchain based database that is decentralised, query-able, immutable, has native support or multiple assets, is Byzantine fault tolerant and much more. However, BigchainDB being a blockchain database, lacks the processing layer or the business logic (smart contract) layer for the assets it stores. While we have platforms like Hyperledger Fabric, which excel at providing smart contract services, they are not platforms that provide user friendly querying functionality the way BigchainDB does.

So, for effectively creating the smart contracts for use across industries, integrating Hyperledger Fabric (which provides the business logic layer) and BigchainDB (which provides excellent functionalities of a database and the distributed ledger technology) provides an incredible solution for the digital future.
Table 1 highlights the differences between Hyperledger Fabric and BigchainDB. 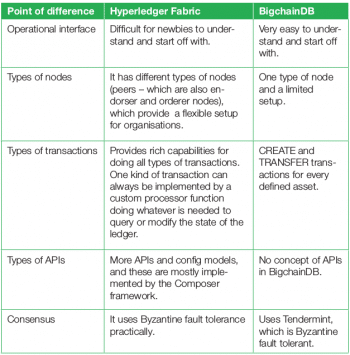 Overall, with tabular analysis, Hyperledger Fabric is suitable for complex business cases whereas BigchainDB provides basic functionalities and mostly can be used in financial organisations.

Configuring the BigChainDB network
To configure the network, you first need to deploy a machine for the BigchainDB node. The requirements for deployment are listed below.

Here are the steps you need to follow for configuration.
Step 1: Update the system using the following code:

Step 5: Install BigchainDB, MongoDB and Tendermint.
a. Make sure that Python 3.6+ is installed in the machine and install the other OS-level packages.

b. BigchainDB server requires gevent and to install gevent, Pip19 or later must be installed.

Step 6: Configure the BigchainDB server.
a. Run the following command:

b. Install and start MongoDB. Use the command:

d. Configure Tendermint. Use the command:

Step 7: Set up the BigchainDB network.
a. Most of the things can be done by node operators. However, these node operators, who are also called Members, must share some information with each other so that they can form a network. There is one special Member who helps to coordinate with everyone, called the Coordinator.

Each BigchainDB node is identified by its:

c. Next, create and share the genesis.json file. At this point, the coordinator should have received the data from all the members and should combine them in the file $HOME/.tendermint/config/genesis.json.
d. The new genesis.json file contains the data that describes the network. The key name is the member’s moniker; it can be any valid string, but use something human-readable like ‘Alice’s Node Shop’.

Note: The list of persistent_peers doesn’t have to include all nodes in the network.

f. If you installed the BigchainDB Python package as above, you should have the bigchaindb-monit-config script in your PATH now. Run the script to build a configuration file for Monit, as follows:

Run Monit as a daemon, instructing it to wake up every second to check on processes:

Monit will run the BigchainDB and Tendermint processes, and restart them when they crash. If the root bigchaindb_ process crashes, Monit will also restart the Tendermint process.
You can check the status by running monit status or monit summary. By default, it will collect program logs into the ~/.bigchaindb-monit/logs folder.
g. Access the Web portal at http://hostname(ipaddress):9984.
Your BigchainDB network is now configured, and up and running!