JFrog Ltd. today announced that Citrix Chief Information Officer (CIO) Meerah Rajavel has been appointed to its Board of Directors. A graduate from Thiagarajar College of Engineering and with over 20 years of experience in enterprise software, cybersecurity, and application performance solutions, Ms. Rajavel brings to JFrog a wealth of expertise in revenue growth, go-to-market, and business transformation strategies that will help drive the company’s advancement in the DevOps and DevSecOps markets. Rajavel’s appointment will increase the size of the JFrog Board of Directors to 10 members.

“We are thrilled to welcome Meerah to our Board of Directors,” said Shlomi Ben Haim, Co-founder and CEO of JFrog. “Her extensive experience in making IT a strategic tool for business excellence and competitive differentiation at world-class organizations will be key in helping guide JFrog through our next stage of global growth and product expansion.” 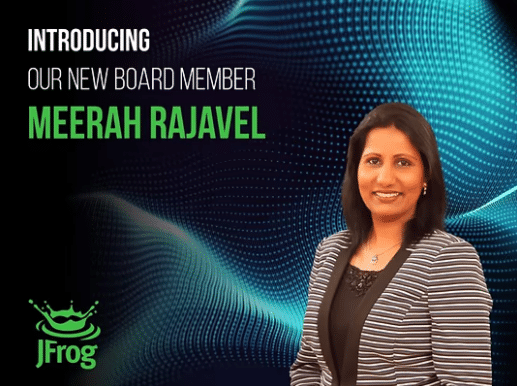 A business-centric technology leader and award-winning CIO, Ms. Rajavel has helped drive profitability, agility, and transformation through the creative use of emerging technologies at large corporations such as Citrix, McAfee, and Cisco Systems, as well as rapid growth startups. A change agent and innovative leader with a reputation for supporting women in technology, Rajavel will be integral to JFrog’s continued commitment to workplace diversity.

Prior to her current post as CIO for Citrix, Rajavel served as CIO and Head of Cloud Product Operations at Forcepoint, where she was responsible for extending the company’s delivery of cloud-based cybersecurity capabilities to customers worldwide. She also held a mix of IT leadership roles at Qlik, Cybersource, InfoSys, and Solix Technologies.

Ms. Rajavel has been recognized among the 50 most innovative technology leaders transforming business by Forbes CIO NEXT 2021, among the Top 25 Cybersecurity Women Leaders to Watch by the Cyberdefense and Software Report, earned the 2017 Stevie Award for Most Innovative Woman of the Year, and was named a 2014 Woman of Influence by Silicon Valley Business Journal.

“I’ve followed JFrog’s growth trajectory over the past 10 years and have been very impressed by its ability to help organizations digitally transform through the seamless and secure delivery of software updates, which are such an integral part of today’s business infrastructure,” said Rajavel. “As the criticality of securing the software supply chain continues to escalate, I know JFrog – which securely manages critical pieces of the software development lifecycle from development, to production, and all the way to devices – will drive market standards in the months and years to come.”

Ms. Rajavel is currently a strategic advisory board member at TruU, an identity platform for digital and physical security, and previously served on the boards of directors of NOVA Workforce and WinIT Leadership. Ms. Rajavel holds a Master of Business Administration in General Management from the Leavey School of Business at Santa Clara University; a Bachelor of Engineering in Computer Science from Thiagaraja College of Engineering in India; and a Project Management Professional Certification from University of California, Santa Cruz.