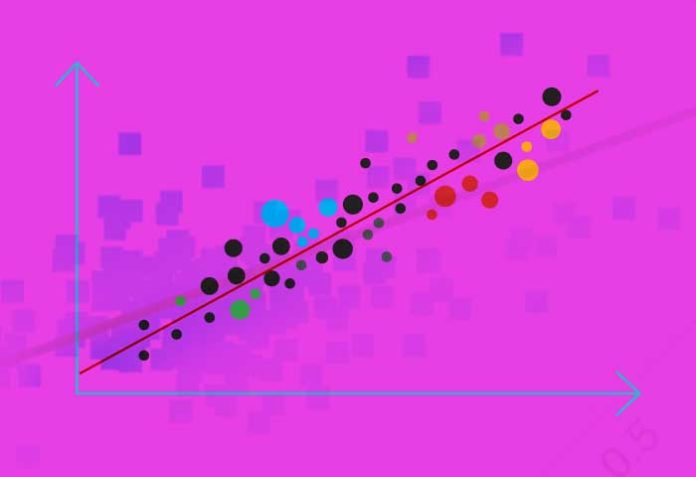 In this article, let’s look at the concept of linear regression with the help of an example and learn about its implementation in Python, and more.

Machine learning (ML) is a scientific study of algorithms and statistical models that computer systems use, in order to perform a specific task effectively without using explicit instructions.

Supervised learning is a type of ML in which a machine learns from labelled data and predicts the output from those learnings. Linear regression is a popular model that comes under supervised learning. Basically, regression algorithms are used for predicting continuous variables like stock prices, weather forecasts, etc.

What is linear regression?
Regression refers to the search for relationships among variables. We can relate it to the sales of ice-cream, which are determined by the weather of the city. With an increase in humidity, ice-cream sales also rise.

Let us look at the simplest algorithm used for prediction.

Learning model: Ordinary least squares (OLS)
This common method can have multiple inputs. The ordinary least squares procedure seeks to minimise the sum of the squared residuals. Each time, we calculate the distance from every data point to the regression line, square it, and take the sum of all the squared errors together, ending up with considering the parameters of the least sum of all squared errors. The following example elaborates this by predicting the price of wine, given its age.

Consider the output variable (y) as the price and the input variable (x) as the age of the wine. Do remember that there could be more than one input variable. To help understand this better, we will run through an example with the values shown in Table 1.

Visualisation
The graphical representation of the data can be seen in Figure 2.

We can easily see that there is a relationship between these two variables. Technically, this suggests that the variables are correlated. The correlation coefficient ‘R’ determines how strong the correlation is.

There are several types of correlation coefficients but the most popular is Pearson’s Correlation. Its coefficient formula is seen in Figure 4.

The two variables are divided by the product of the standard deviation of each data sample. This is the normalisation of the covariance between the two variables to give an interpretable score.

Let’s switch back to our scenario of age and price of wine to find out whether there is a correlation and, if yes, what is the value of R.

The output seen is:

The R value is 0.985, which is close to 1. Hence, the two variables are strongly positively correlated.

Linear regression equation
Now that we have seen that our data is a good use case for linear regression, let’s have a look at the formula. The linear equation is:

Here, y is the predicted variable. B0 is the intercept — the predicted value of y when x is 0. In this example, you can see that when x is 0, the value of y is 75. B1 is the regression coefficient, which refers to the change expected in y as x increases. Again going back to the example, as the number of years increases, the price of the wine also increases. Now, let’s try and find out how much it increases.

When we have multiple input variables, as seen here, the aim of the linear regression algorithm is to find the best values for B0, B1, .. , BN.

A model ‘train, validate and test’ set
Before training our model, we need to do a train and validation split.

OLS calculation
In this method, we have to choose the values of B0 and B1 such that the total sum of squares of the difference between the calculated and observed values of y is minimised.

Before we write the source code in Python, we need to understand how the OLS works if we had to do things manually.

Step 2: Find the residual sum of squares, written as Se or RSS.

The calculation is given in Table 3.

Step 3: Find the regression equation using the B0 and B1 formulas.

Let’s plug in the values we calculated in Step 1.

The regression equation is:

Here’s a recap of what we have seen so far.

The relationship between the residuals and the slope B1 (alias a) and intercept B0 (alias b) is always as follows.

Cost function
This helps us find the best possible values of B0, B1, .., BN, from where the average is taken by all the residuals. It is also known as the mean squared error (MSE) function.

We can also use the root mean squared error (RMSE) function as a cost function.

RMSE is more sensitive to outliers. But when the outliers are exponentially rare (like in a bell shaped curve), the RMSE performs very well and is generally preferred.

Correlation coefficient (R)
Now that we have the regression equation, let’s see how accurate our predictions are when we use it. As per our expectation, shown in Figure 2, the line should be closest to the dots, i.e., the predicted values should be closer to the observed values (dots).

The calculation is given in Table 4.

To check how much variance is explained by our regression equation, we use R^2. This is also called the coefficient of determination.

Model training
It’s really simple to code in Python, since all the functions to be used are already written. We will be using the module named sklearn for the task.

The methods used are:

The output source code is:

Predictions
Now that we have trained our model, let’s see how close to the truth the predictions are.

Though the model performed really well, the predictions were not completely accurate. So how confident are we about our model’s prediction? To answer this question, we need to know the ‘confidence interval’.

Generally, we don’t want our model to be 100 per cent accurate, because it will be considered as an overfit and will not generalise well.

In simple terms, assume the model is a student, who is going for an English language exam. We have given this student a few questions to learn which, coincidently, are asked in the exam. The model does well, scoring full marks.

However, this will not always be the case. If the questions are different, the model will not understand them and fail, as it has memorised only these answers verbatim.

The takeaway from here is that instead of giving a few questions, giving the whole book (i.e., more data) to the model will make memorising hard, and it will start learning and finding patterns.

The assumptions we make here are: