Frozen Bubble is a pop-cap style game that puts the user into a world of colored balls, ice and penguins. While that might sound a bit silly, that’s the whole point.

The game works on the same principle as several very popular pop-cap style games such as “Dinosaur Eggs” and even the classic game “Puzzle Bobble” that started it all. The concept of Frozen Bubble is simple. The screen is filled with colored balls that hang down from a gradually descending press plate. Your objective is to aim your igloo cannon at these balls and fire your own colored balls at them. If you match 3 in a row of the same color, any attached colored balls of the same color, or any below them, immediately fall. It’s almost like playing connect three in reverse. Of course, if the balls that haven’t fallen yet touch the igloo, it’s game over. 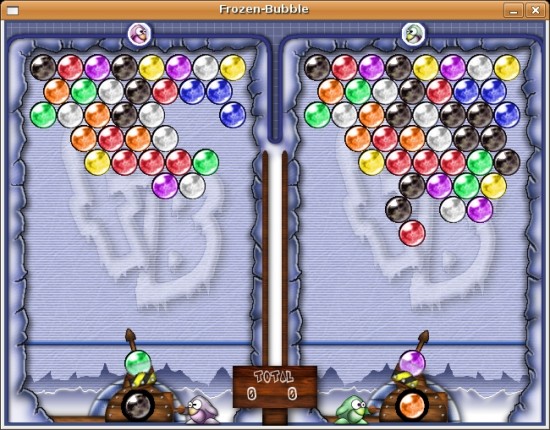 While that might seem a bit too simple, that’s actually intentional. You’re meant to have that one basic task to perform within the game. Since it’s a pop-cap type game, you’re typically not going to be confronted with complex puzzles or crazy hoops you have to jump through to win. Simple is the key. This way anyone from two to seventy two will find the game fun and relaxing to play. But to some extent, I think the creators went a bit too far to keep the concept of simple.

I say this because the game really provides you with essentially no challenge for the first 15 or 20 levels. It’s not until you get up around level 20 that things start becoming a challenge. And even then you’re not really truly challenged until you reach level thirty. In fact, some of the levels are so simple that just one single well placed shot and the level is over. Being able to win a level with just one shot seems a bit counter productive to the goal of making a fun and entertaining game in my honest opinion. Not all the levels are like this though, but there are a couple. There are a few more than only require two or three well placed shots and the level is over.

But that doesn’t mean the game has to be boring. Since it’s flexible, if you want, make your own challenges. Also, if single player isn’t challenging enough for you, then you may want to look at the multi-player option. You can do player vs player side by side battle on the same machine, or over the internet. So if you ever feel up to it, you can challenge your friends to a quick game. Given the extra features of the multiplayer side of the game, it should provide you with more than enough of a challenge to keep things interesting for a long time to come.

Frozen Bubble, while overly simple in many ways, is still a very good game and certainly worth your time to at least look into and maybe even play. If nothing else, it’s a good time killer when you’re bored or have little to do.

If you would like to try Frozen Bubble, you can get it by going through your favorite Linux or BSD package manager or repository. The game is currently available only for Linux and BSD, but a Windows and a Mac port are both in the works and should be available at some point in the future.

While the game might sound to be custom made for kids, it shall work as a great stress buster if you manage to sneak the live DVD in your office :-) Moreover, you can also play against other players, on the internet, and show off your score to the community.

While we could easily get connected to the online server, there were only 7 games and 3 players online. Moreover, what was a bit weird was, other than me, everyone was named FINALFANTA.