If you thought Linux was meant only for the geeks, take a look at what the “real” users have to say about this misconception.

Linux was introduced in 1993, and ever since, it has been plagued by a variety of misconceptions. This has left a large number of people sceptical about using Linux. As a result, the mere mention of open source is known to intimidate many computer users who are not entirely aware of what open source is, and how to use it.

Last month, LINUX For You conducted a poll on its Facebook page to find out what the most common myths about open source are. 451 of the 666 people polled voted that the most common myth was, ‘Linux is just for geeks.” The results make it evident that the pseudo-complexity associated with open source is the main reason that misleads most computer users into believing that Linux is not for them.

Sreekandh Balakrishnan, an independent consultant, feels that Linux was once meant for geeks — but despite the changes it has been through, the belief still prevails. “To an extent, the Linux community was earlier made up of geeks. However, it is getting attention from the mainstream market, and many consumers are demanding laptops loaded with Ubuntu. Five years back, I would have agreed that Linux was a geek thing, but today, it is so user-friendly that regular consumers want it. Of late, distributions like Ubuntu and other Live CDs have made it simple to have a system running Linux up in ten minutes,” Balakrishnan states. He also notes that since consumers make their choices based on advertisements, they go for products that are marketed well, “Linux gets left behind, not because it is lower-grade, but because the marketing campaigns for paid products are perceived to be better.”

Are you smarter than a third grader?

It is assumed that Linux is a programmer’s OS, but Linux sports very intuitive interfaces, and requires no special skills, such that even school kids use it. Linux engineering manager at Dell India R&D, Divyanshu Verma, illustrates, “A few years ago, my friend bought a Linux desktop, but he was baffled at the very thought of using it. However, he decided to try it, considering other operating systems’ vulnerability to viruses. Meanwhile, his eight-year-old son learned it quickly, and today, he does all his school assignments and plays computer games using Linux. This proves that anyone who can let go of the mind block can easily get acquainted with Linux.”

Abhijit Das, an IT consultant, cannot agree more, “I have been using Linux for over three years, and I find it as simple to use as proprietary software. In fact, my five-year-old daughter, Sara, knows how to find her way around on my Linux-based system, and can play games on it. I do not think people need an education in FOSS to learn how to use it.”

One of the main reasons why people believe Linux is for geeks is because they think it is not as user-friendly as proprietary software. Prakash Advani, regional manager, Canonical (Asia-Pacific), has been in the IT industry for over 18 years, and he feels that Ubuntu operating systems are as simple as it can get. “Ubuntu 11.10 is much easier to use and install than many other popular operating systems. Once people try Ubuntu, the experience will change their perception about Linux,” he says.

According to the Facebook survey, the second most common myth is, “Open source software is not secure, as the source code is ‘open’.” Right from the early days of open source computing, Linux has been portrayed as a difficult and unsecured operating system. However, Advani has been using Linux for over 15 years, and has never faced a problem so far.

He vouches, “I do not even run an anti-virus! People are apprehensive because the code is open, but any change to the code has to go through a quality check. ‘Open’ means anyone can review it, but not everyone has the authority to change the core application. Many projects have a process of approving a new contributor before they accept code. This ensures that only the good code gets in. There is also the peer review, which ensures that the code is good.”

It is even predicted that the use of Linux at the enterprise level will increase immensely. A Gartner study found that 99 per cent of Global 2,000 enterprises would include open source in their mission-critical software portfolios by 2016, up from 75 per cent in 2010.

Narayana Menon, lead, Strategy and Marketing (South Asia), agrees: “I believe that the adoption of Linux in enterprises would continue to grow, not just because of the flexibility and cost benefits, but also due to factors like adaptability, portability and being hardware-agnostic. The Linux market in India has been growing yearly at a steady 14 to 16 per cent. This is fuelling the growth of an ecosystem around the model, which  includes customers, vendors, systems integrators/partners, developers and the open source community. The evolution of a strong ecosystem around a commercially viable model ensures that Linux is marketed more outside the technical community as well.”

Show me the money

The myth “It is difficult to make money from open source” ranked third in our survey. Since open source is “free”, many wonder where the money in open source comes from. The open source business model is different, and the money comes from services and support, not from the license. Companies like Red Hat and Novell offer paid support plans and specialised Linux-based software to business users.

Anuj Kumar, MD, Red Hat India, explains, “One can download open source software without paying for licenses. However, support, management and upgrades are required to run the software. This is where commercial open source generates revenue. At Red Hat, our business model is referred to as the subscription model, and it is the most effective way to deploy, manage, and secure open source technology.”

Moreover, the need for skilled manpower due to increased commercial Linux deployment also drives more Linux training and certification. “More employment opportunities ensure that the ‘geeks’ can make a living with Linux, rather than treating Linux as an indulgence for their spare time. The commercial benefits of the model also allow companies like SUSE to invest in research and development, opening more employment opportunities. This model provides a win-win scenario for all involved, offering different benefits to customers, partners and vendors.”

Jyothi Bacche, head, Open Source Practice, MindTree, feels that the most prevalent myth about open source is, “‘Free’ in FOSS means ‘free’ as in ‘cost’.” ‘Free’ in this context is a matter of the users’ freedom to run, copy, distribute, study, change and improve the software. Bachhe reveals that she has seen many users only treating open source software as freeware, not focusing on the rights it gives to users in terms of free access to source code.

In the Facebook survey, the least number of votes went to, “It is difficult for open source professionals to find a job.” Advani reasons, “This is because people know that there is great scope in open source and FOSS professionals are more in demand, and that they usually get a higher salary.”

The arguments for and against open source gradually get trivialised once people start exploring open source for themselves. Verma feels that Linux and open source have to be popularised among the mainstream audience. “We, as developers and users, have a responsibility to spread the word that Linux is for everybody,” Advani concludes.

By the way, here’s a screenshot of he now-closed Facebook poll results. 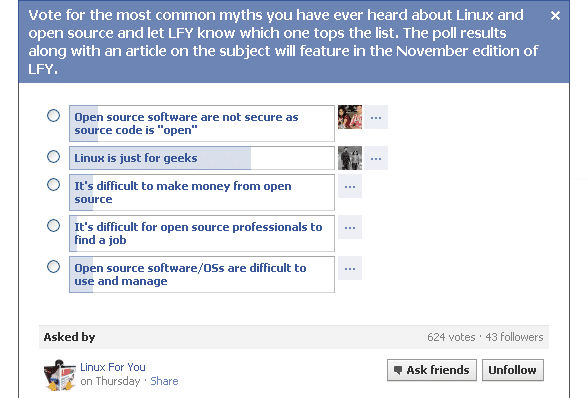