Platform as a Service (PaaS) has come to stay as a developer tool, as it allows users to concentrate on the app rather than be involved with the platform. OpenShift, developed by Red Hat, is a great PaaS tool. Wade through this article to get acquainted with it.

OpenShift offers a vibrant Platform as a Service (PaaS) facility, which enables developers to focus more on the core logic of the application rather than the platform and configuration details of the dependencies. The support for a wide spectrum of programming languages, databases, etc, has made OpenShift a prime choice in the PaaS arena.

Cloud computing has truly transformed the working style of not only the IT industry but also of most online users. For example, today cloud storage has become indispensable for many of us. PaaS facilitates application developers to focus on the core logic; all other platform and environment related issues are handled by the service providers. PaaS is focused on software developers.

Welcome to the world of PaaS
The world of PaaS is loaded with various choices. The selection of a specific PaaS tool depends on various parameters like support for various programming languages, databases, etc. Some of the PaaS options are listed below:

Though each one of the above mentioned PaaS tools has its own advantages, OpenShift is a multiple award winner. For the complete list of awards it has won, visit https://www.openshift.com/awards. These awards, along with its support for various technologies, make OpenShift a very valued member of the PaaS world.

OpenShift
OpenShift is available in three different modes as illustrated in Figure 1.

OpenShift Origin is the upstream project for the OpenShift Online and OpenShift Enterprise versions.

Setting up OpenShift
OpenShift can be tried in various modes, as listed below:

(For the Origin version)

(For the Enterprise version)

The various parameter settings for the above installation are clearly given in the official documentation.

OpenShift Origin: The technologies
One of the important advantages of using OpenShift Origin is its ability to support a wider spectrum of technologies covering various programming languages, databases, etc. Some of these are listed below:

Apart from the above, OpenShift Origin has support for continuous integration with Jenkins Server and Jenkins Client. Cron, which enables us to run command line programs at regular intervals, is also supported.

The disk space provided with all these gears is 1GB in the default mode.
Cartridges: To make the gears usable for specific purposes, OpenShift requires you to add the components. These pluggable entities are known as cartridges. Each gear can have a number of cartridges. At the same time, a single cartridge can run on more than one gear. Cartridges are of two types as shown in Figure 3.
Standalone cartridges: These are for programming languages or application servers.
Embedded cartridges: This type of cartridge is used to enhance the applications. These cartridges alone cant be used to build applications. 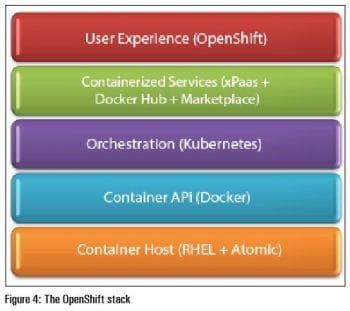 The OpenShift stack
The recent release of OpenShift has an improved stack as shown in Figure 4. This stack now includes Docker, Kubernetes and Project Atomic.
Docker: This is an open source tool. Docker packages the applications and the related dependencies as containers. It consists of an engine, and a lightweight runtime and packaging tool. For further information on Docker, visit https://www.docker.com/whatisdocker/. Stating it simply, Docker facilitates the creation of portable, self-sufficient application containers.
Kubernetes: This is an open source orchestration system. It can be used with Docker containers. Kubernetes is lightweight, portable and extensible. For detailed information on Kubernetes, visit http://kubernetes.io/. A cluster of Linux containers can be managed as a single system using Kubernetes.
Project Atomic: This is for deploying and managing Docker containers. Project Atomic is getting more popular in recent times due to its powerful features. Further information on Project Atomic is available at http://www.projectatomic.io/.
Covering every aspect of OpenShift is beyond the scope of a single article. For developers who want to get into the details of OpenShift, there is an excellent open book available at the official site: Getting Started with OpenShift: A Guide for Impatient Beginners. The book can be downloaded from https://www.openshift.com/promotions/ebook/thanks.
The open source nature of OpenShift Origin is its greatest advantage, allowing users to customise the PaaS according to the specific needs of an organisation. Its improved stack containing technologies make OpenShift a superb choice in the PaaS arena.