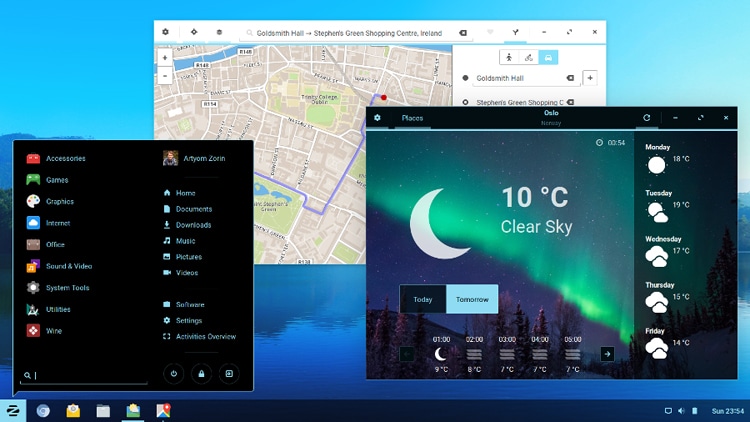 Zorin OS 12 is the first-ever Ubuntu flavour that appears to be a Windows-alike Linux platform. This new operating system does not have any similarities with a traditional environment like GNOME or KDE. Instead, there is Zorin Desktop 2.0 that is quite identical to the native interface of Microsoft Windows (precisely Windows 10).

The GNOME-powered Zorin Desktop environment has features like universal search, actionable notifications and activities. There is also advanced display support to enable touch screen inputs. The operating system is backed by Linux 4.4 kernel running Ubuntu 16.04 LTS that will receive security updates until April 2021.

Identical to the taskbar on Windows 10, the new Zorin OS version comes with a familiarity feature that combines two or more content from a single app on the dock to save space for some other tasks. The platform includes a Chromium-based web browser that supports extensions from the Chrome web Store and comes with Google Drive integration. Additionally, there are preloaded apps such as maps, weather and photos.

All in all, Zorin OS 12 is seemingly a great Windows 10 alternative. You can use the Bash shell on the platform to leverage some commands alongside feeling the Windows world through the highly-intuitive interface.

In addition the newest release, the Zorin OS team has announced a new release schedule. This programme will bring its major releases once every two years.

“With Zorin OS 12, we are introducing a new release schedule going into the future. Major releases of Zorin OS will now be made once every two years. In between, a number of point releases will be made that will include incremental updates to the built-in apps as well as support for new hardware, security fixes and various under-the-hood improvements,” the team writes in a blog post.

Zorin OS 12 is available free under “Core” version and at a cost for its “Ultimate” edition. The developer team is also in the development of its Lite, Education and Business editions that will be debuted in the coming weeks.