Home Audience For U & Me GlusterFS: A dependable distributed file system 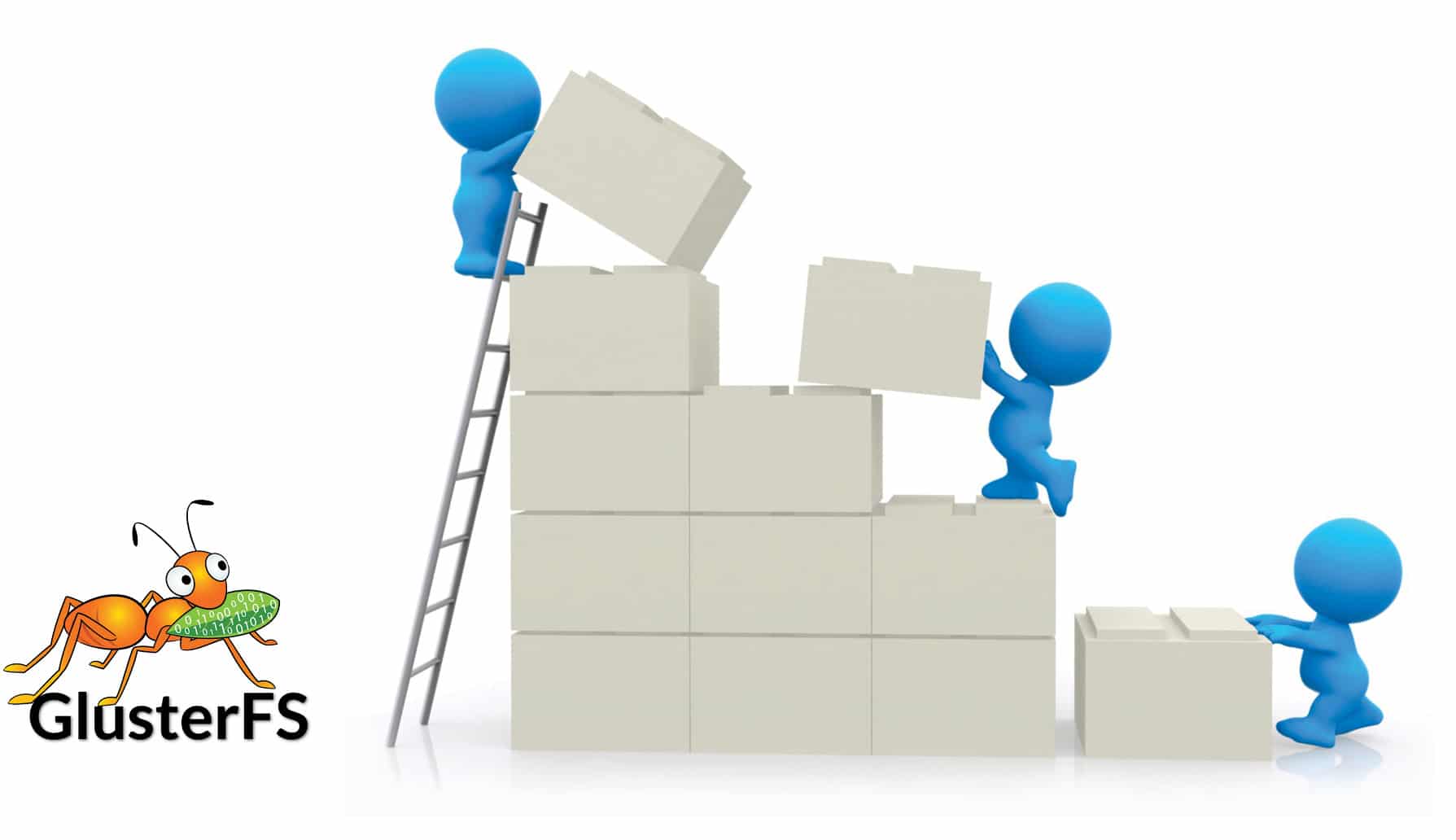 The Gluster file system is an open source distributed file, which can scale out in a ‘building block’ manner to store several petabytes of data. This article will be of interest to newbies and those who wish to know more about file systems.

A distributed file system gives us a way of storing and accessing files in a client-server architecture. We can use more than one server to store data and use multiple clients (local or remote) that can access data from these servers. A distributed file system organises and displays files and directories from multiple servers as if they were stored in your local system, thereby projecting a simple interface to the user or application. The main advantage is that it is easier to distribute documents to multiple clients and provide a centralised storage system so that client machines do not use their resources to store the data.

GlusterFS concepts
Some of the basic terminology that we need to know to understand GlusterFS is given in Table 1. 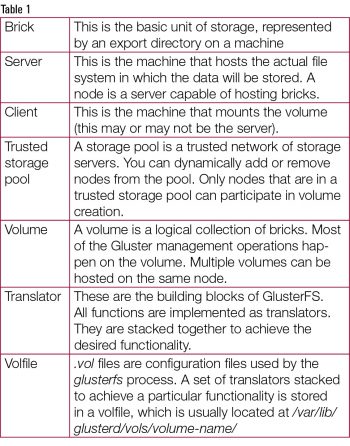 Introducing GlusterFS
GlusterFS is a distributed file system that can scale up to several petabytes and can handle thousands of clients. It clusters together storage building blocks over RDMA or TCP/IP, and aggregates disk and memory resources in order to manage data in a single global namespace. These blocks do not need any special hardware to store data and are based on a stackable user space design. GlusterFS is a user space file system and hence uses FUSE (file system in user space) to hook itself with the virtual file system (VFS) layer. FUSE is a loadable kernel module that lets non-privileged users create their own file systems without editing kernel code. Gluster uses already tried and tested disk file systems like ext3, ext4, xfs, etc, as the underlying file system to store the data.

As a part of volume creation glusterd will generate client and server volfiles. A volfile is a configuration file that has a collection of translators, where each translator has a specific function to perform and together implement the desired functionality. These files are stacked in a hierarchical structure. A translator receives data from its parent translator, performs the necessary operations and then passes the data down to its child translator in the hierarchy.

Winding fop via the client-server graph
On mounting a volume on a client machine, a glusterfs client process is spawned, which interacts with the glusterd process and gets a configuration file or the client volfile. Glusterd also sends a list of ports on which the client can talk to each brick.

Types of volumes
The Gluster file system supports different types of volumes, depending on the requirements. Some volumes are good for scaling storage volumes, some for improving performance and some for both.

Distributed GlusterFS volume: This is the default GlusterFS volume, i.e., while creating a volume, if you do not specify the type of the volume, the default option is to create a distributed type of volume. In this volume, files are randomly stored across the bricks in the volume. There is no data redundancy. The purpose for such a storage volume is to scale easily. However, this also means that a brick failure will lead to complete loss of data and one must rely on the underlying hardware for protection from data loss.

Replicated GlusterFS volume: In this volume, we overcome the data loss problem faced in the distributed volume. Here, an exact copy of the data is maintained on all the bricks. The number of replicas in the volume can be decided by the client while creating the volume. One major advantage of such a volume is that even if one brick fails, the data can still be accessed from its replica brick. Such a volume is used for better reliability and data redundancy.

Striped GlusterFS volume: Consider a large file being stored in a brick that is frequently accessed by many clients at the same time. This will cause too much load on a single brick and might reduce its performance. In a striped volume, the data is stored in the bricks after dividing it into different stripes. So, the large file will be divided into smaller chunks (equal to the number of bricks in the volume) and each chunk is stored in a brick. Now, the load is distributed and the file can be fetched faster but no data redundancy is provided.

Reliability
To maintain availability and ensure data safety, it is recommended that you create a distributed replicated volume. We must have the replica pairs on different nodes, so that even if a node comes down, the other replica pair can be used to access data, which is immediately replicated on all pairs. Another data safety feature in GlusterFS is geo-rep. Geo-replication provides asynchronous replication of data across geographically distinct locations. It mainly works across a WAN and is used to replicate the entire volume, unlike Automatic File Replication (AFR) which is intra-cluster replication (used for replicating data within the volume). This is mainly useful for backup of the entire data for disaster recovery.

GlusterFS performance
There are some translators that help in increasing the performance in GlusterFS. These, too, are present in the client volfile.

IO-cache: This translator is used to cache the data that is read. This is useful if many applications read data multiple times and reads are more frequent than writes. The cache is maintained as an LRU list. When io-cache receives a write request, it will flush the file from the cache. It also periodically verifies the consistency of the cached files by checking the modification time on the file. The verification timeout is configurable.

Write-behind: This translator improves the latency of a write operation by relegating it to the background and returning to the application even as the write is in progress. Using the write-behind translator, successive write requests can be pipelined, which helps to reduce the network calls.

Stat-prefetch: The purpose of this translator is to store the stat information. It helps to optimise operations like ls -l, where a readdir is followed by a stat on the entry. This translator needs to maintain the following fops.