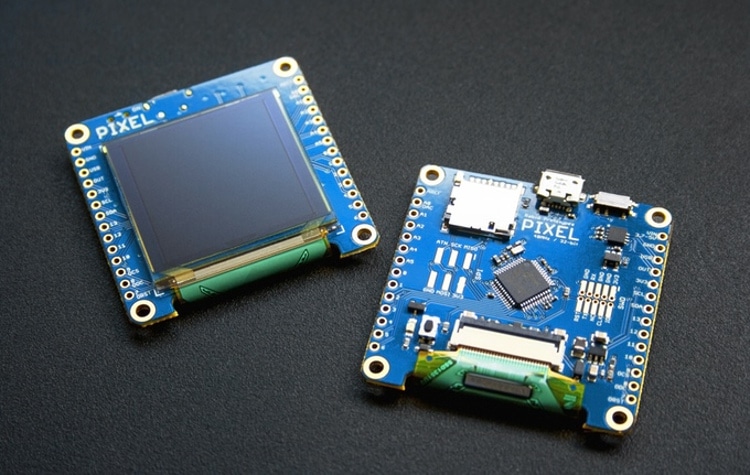 Arduino was already a well-known prototyping offering. But Kickstarter project Pixel 2.0 has expanded the usability of the Arduino platform by bringing it to the wearables market.

The square-shaped Pixel 2.0 is an Arduino Zero compatible board with an OLED panel on one side. The 128×128 color display panel is 1.5-inch in size that makes it an easy fit for wearables. You can use the board either like a smartwatch or embed its presence into a jacket to make it a smart outfit.

For performing different tasks on the small screen, the Pixel 2.0 has a 32-bit 48MHz Atmel ATSAMD21G18 Cortex M0+ microcontroller along with 32K of RAM. There is also a microSD card slot that gives you the source to load your custom-made graphics and text.

The 1.8-inch board has 14 digital I/O pins, six analogue input pins and an output pin. Further, it comes preloaded with Arduino/Genuino Zero bootloader and is compatible with the Arduino’s SPI and SD libraries. You can also use Adafruit’s graphics library to easily create new images and drawings for the Pixel 2.0.

Though the pre-installed bootloader is specific to Arduino developments, there is a standard SWD header on the Pixel that has full compatibility with Atmel ICE. This means you just need to work on the ICE to install even a modified bootloader.

Unlike some other Arduino compatible boards, the Pixel 2.0 is entirely an open source model. You can leverage the open source support to get access to its schematics and PCB layout.

Moreover, you can modify the Pixel design and even integrate it into your own boards — without the need for any prior royalties and licensing fees.

The Pixel 2.0 is available at $75 on Kickstarter, with initial shipments scheduled for June.