While it is just another classic overhead-scrolling space shooter, it is a game with a twist. You can not let any of the alien ships past you; each one will cost you a life. Moreover, the ammunition is also limited. This is what makes the game very challenging, almost impossible.

Chromium BSU is a spectacular modern incarnation of the overhead scrolling shooter. The graphics, sound, and music are outstanding, and the gameplay is challenging but not impossible. There are a few unique elements that I have found in Chromium BSU that most other overhead scrollers don’t have. The first is, you can’t let any of the enemy ships past you; each one will cost you one extra life. That makes the gameplay much more challenging, but you’re also given something else that you don’t see in a lot of space shooters: damage leeway. If you can’t put enough bullets into a ship to kill it, just run into it and endure a little ship damage. You also don’t have to worry too much about dodging enemy fire. Lastly, you have limited ammunition — I have never seen that in this kind of game before. 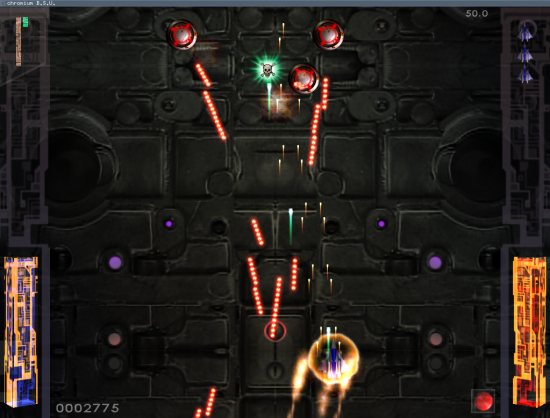 There is one redeeming element to the game’s high level of challenge: the ability to start the game at the last level you completed. So if you get sick of playing after reaching level 2, you can quit the game and come back to it tomorrow and start at level 2. Sure beats feeding quarters to a machine.

The animations of the powerups and new ammunitions are very intriguing. Other than them, as good as AstroMenace.

Good enough to keep you engrossed into the game.