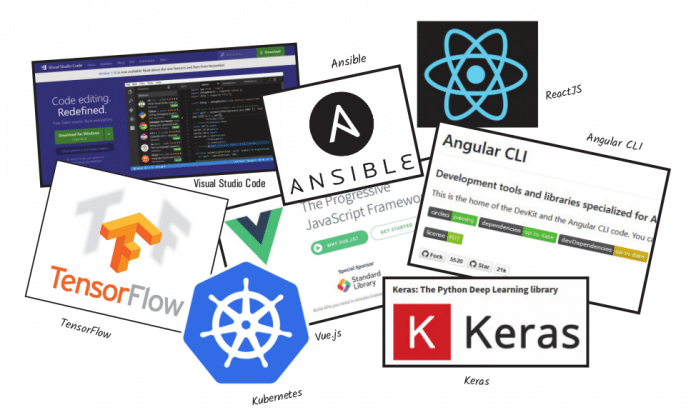 Let’s look back at the most extensively used open source projects of 2018. While this article is aimed at software developers using open source tools and frameworks to build applications, others too can get a feel of what’s trending.

The field of software development is always changing, with cutting-edge technologies, tools and best practices evolving continuously. Open source projects have a major influence in the software development world. As per the GitHub blog, in 2018 alone, more new users signed on than those that got added in the previous six years combined.

Visual Studio Code (VS Code) is a free and open source code editor developed by Microsoft. It includes support for debugging modern Web and cloud applications, embedded Git control, syntax highlighting, intelligent code completion, snippets and code refactoring. Visual Studio Code was ranked the most popular developer environment in the Stack Overflow 2018 Developer Survey, with 34.9 per cent of 75,398 respondents claiming to use it.

The good thing about VS Code is that you can customise every feature as per your needs, and install any number of third-party extensions. VS Code is an open source project; so you can also contribute to the growing and vibrant community on GitHub.

VS Code includes built-in support for Node.js development with JavaScript and TypeScript. It also includes great tooling for Web technologies such as JSX/React, HTML, CSS, SCSS, Less and JSON.

TensorFlow is an open source machine learning (ML) framework for high performance numerical computation. Originally developed by the Google Brain team for Google’s use, it was released under the Apache 2.0 open source licence on November 9, 2015. Its flexible architecture allows easy deployment of computations across a variety of platforms (CPUs, GPUs and TPUs), and from desktops and clusters of servers to mobiles and edge devices.

TensorFlow is currently the top trending machine learning framework; it also supports APIs for beginners and experts to develop desktop, mobile, Web and cloud based applications.

Ansible is an open source IT automation tool. It provides configuration management, infrastructure orchestration, task automation and more advanced IT tasks such as continuous deployments or zero downtime rolling updates. Ansible’s main feature is that it is agent-less, i.e., no software or agent is installed on the client that communicates back to the server. It is written in Python and uses YAML for its playbook language, both of which are considered relatively easy to learn.

Vue.js (Vue) is an open source JavaScript framework for building user interfaces. First released in February 2014, it is one of the most popular JavaScript frameworks in the market. Its GitHub page has 123,936 stars. Vue.js features an incrementally adoptable architecture that focuses on the view layer only, and is easy to integrate with other libraries or existing projects. It also offers officially maintained libraries and packages for complex applications such as routing (vue-router), state management (vuex) and building tools.

React Native is a JavaScript framework for building native mobile apps using JavaScript and React. It’s an open source project which comes under the MIT License. React Native is built on top of ReactJS. It is a great choice for developers with expertise in JavaScript as there is no need to learn Android-specific Java or iOS’s Swift.

Angular CLI is an open source command-line interface tool that can be used to initialise, develop, scaffold and maintain Angular applications. You can use Angular CLI directly in a command shell, or indirectly through an interactive UI such as Angular Console. Angular CLI creates, manages, builds and tests Angular projects. It is one of the top trending open source projects based on GitHub activity.

Keras is an open source neural network library written in Python that is capable of running on top of TensorFlow, Microsoft Cognitive Toolkit, or Theano. Keras was the tenth most popular tool in the KD Nuggets 2018 software poll, with 22 per cent of respondents using it.

Kubernetes is an open source container-orchestration system designed for the automation of deployment and scaling, and for the management of containerised applications. It was originally designed by Google and is now maintained by the Cloud Native Computing Foundation. Kubernetes ranked eighth on the list of top open source projects at GitHub, based on the contributor count.

The blockchain is one of the top tech trends of the past year and has seen a lot of interest. The most popular open source blockchain project is Bitcoin, which is an experimental digital currency that enables instant payments to anyone, anywhere in the world. Bitcoin uses peer-to-peer technology to function without a central authority — the network collectively manages transactions and issues money. Bitcoin was released as open source software in 2009.

I have listed ten trending open source projects of 2018. However, there are many other projects that are also growing rapidly, like Flutter, Deno (a secure TypeScript runtime on V8), ValveSoftware/Proton for porting games to Linux, and Detectron (from Facebook AI Research) to support research in image recognition algorithms.