Microsoft-owned software development platform and community, Github, is looking to expand its India market with major investments and new hiring.

The company is also looking to hire a General Manager (GM) for the India operations, according to a job vacancy listed on its website.

“India is the 3rd largest community on GitHub and we’re making major investments there — starting with a GM to build our office from the ground up. We’re looking for an entrepreneurial, experienced leader who understands developers,” GitHub CEO Nat Freidman tweeted.

As claimed by the company, at present, more than 31 million people use GitHub across 100 million repositories or codebases.

GitHub was acquired by Microsoft in October 2018 in a deal worth $7.5 billion. Following the acquisition, GitHub’s desktop web traffic increased by nearly 70 per cent in India, compared to the traffic in 2017. In terms of traffic hike, India had the highest growth for GitHub from 2017 to 2018. 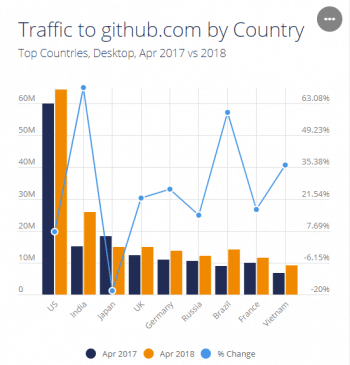 “This leader will have the opportunity to create a vision for market expansion, building community and adoption within the software developer industry, understanding the partner and SI landscape and develop deep partnerships with enterprise customers to support their business goals,” Github said in  the job description page.

The company is seeking a candidate with relevant experience in international business. Candidates from a variety of different industries and job experiences can apply for the role as the company believes “there’s no one background that is an ideal fit.”

According to the job description, the General Manager would have to engage the developer and student communities in India to understand their needs, provide opportunities to learn and collaborate and expand access to GitHub.

Further it said, the GM will work with channel partners, including distributors, system integrators, resellers and services partners to drive for market share.