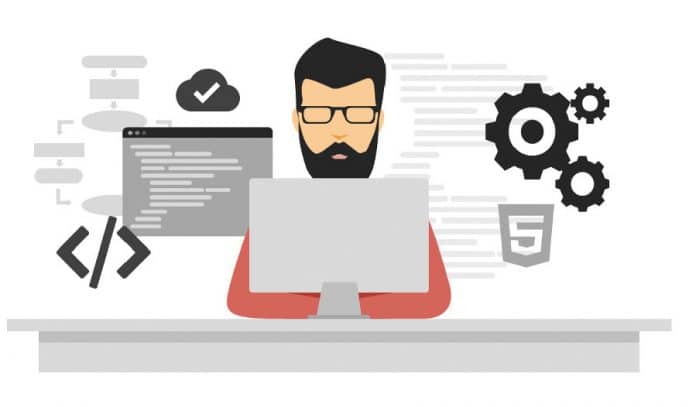 Web apps load like regular Web pages or websites. Their functionalities include working offline, push notifications, and device hardware access that was traditionally available only to native mobile apps. Web development plays an important role in the Internet ecosystem.

Let us kick off this discussion on the best open source tools for Web developers with a closer look at Git.

Most developers use the Git repository for version control. The Git server helps to manage multiple repositories (when many people work in the same repository but on different tasks), to keep track of changes in the code.

Now, let’s understand Git’s workflow, branching strategy and commands. When working in a team, there are some very important things that everyone should know about Git. These include the following.

The workflow of Git

Git uses the same centralised pattern as a subversion (SVN) workflow but the developer is empowered by its ease of use, compared to SVN. All developers have their own local copy of the entire project while each one works independently, oblivious of all other changes to the project. Developers can add commits to their own local branch and completely ignore the main development/master branch until convenient; i.e., when a bug is fixed or a feature is complete.

In Figure 1, the third stage is the developer’s local branch. The Git Terminal is recommended for use although Git GUI is available. The latter might be easier but the developer community finds the terminal more convenient. In Git Terminal, the command line serves to inform the user and give proper error messages; and when the command fails, it also points out the proper solution.

To create a working directory, use the following command:

To clone the central repository, use the command shown below:

The following command is used to create a local branch and checkout:

How to make a change and commit: Once a repository is cloned in the local machine, then the developer can make changes using the standard Git commit process — to edit, stage and commit. If the developer is not familiar with staging, then the other way to prepare a commit without having to include more changes in the working directory is as follows:

Pushing a new commit in the central repository: Once the local repository has new changes committed, these should be pushed to share with other developers in the project, by using the following command:

Git merge development: If you encounter a merge issue, open your merge tool, solve all conflicting merge issues and then repeat the following command:

Let’s look at some of the best practices of Git, based on experience.

Bootstrap is one of the most popular open source HTML, CSS and JS front-end frameworks. Its latest available version is 4.2.1. In Bootstrap, a 12-grid responsive layout is available, apart from 13 jQuery plugins, SCSS (which is common for UI-like carousals), pop-ups, modals, and other customised Bootstrap classes. Bootstrap is easy to learn and is used for creating responsive websites.

How to install and use Bootstrap

There are two methods to install Bootstrap in your project.

If you don’t have much knowledge about HTML, CSS, JavaScript or jQuery, there’s no need to worry because the Bootstrap framework is easy to learn and use.

New features in the latest version of Bootstrap

There are some new features in the Bootstrap beta version. This version includes some stabilised CSS, a Media Query style and an updated new grid style.

The new grid tier, xl, increases the media query range all the way down to 544px.

There are many more changes in Bootstrap v4 as described below.

Angular is the right choice for creating a single page application. It helps to publish the Web component that is used in HTML pages. The latest version is Angular v6. In this version, the new features available include the component development kit, Angular CLI and an Angular Material Package update. In Angular, we use the Typescript language, which is the superset of JavaScript .

Before installing Angular, we first need to check that Node.js is present in the machine. If so, then check which version it is, as well as the NPM version by using the following command:

After that, execute the following command to install Angular:

Check the Angular version by using the command:

To create a new Angular project, use the following command:

Go to the my-first-app folder and run the ng serve command.

The basic structure of an Angular project

Some important reasons for using Angular are listed below.

There are many other important changes in Angular 6 such as the latest RxJS 6.0, tree shaking, the Bazel compiler, ngModalChange, etc.

ReactJS is a JavaScript library that supports both the front-end and the server for the user interface and Web applications. React Native is a JavaScript mobile framework, which is used to compile native app components for mobile application development; it has support for different platforms (Android and iOS). Both have been open sourced by Facebook.

ReactNative and ReactJS both use ReduxJS. In both, components can be reused to save time for development. In React, when rendering a page completely from the server to the browser, the SEO of the Web app improves. It also improves the debugging speed, making the developer’s life easier. If you are not familiar with React, don’t worry, since it is easy to understand.

Differences between ReactJS and ReactNative

Some important differences between ReactJS and ReactNative are listed below.

Apache Cordova is the latest version of the PhoneGap mobile application development framework. It enables software programmers to build mobile apps with the help of HTML5, CSS3 and JavaScript instead of platform-specific APIs such as Android, iOS or Windows phones. It automatically wraps the CSS, HTML and JavaScript, based on the platform of the device. It is open source software.

Listed below are some of the main advantages of Apache Cordova:

The disadvantages of Apache Cordova are listed below:

Ionic is an open source framework that is used for hybrid application development. It is a developer-friendly framework with high performance. It has a good look and feel on mobile devices. In Ionic, we use HTML, CSS, Sass, SCSS, JavaScript, Apache Cordova as well as Angular, React, Vue or no framework at all. Ionic is backend-agnostic and provides connections with Firebase, AWS and Azure.

Advantages of the Ionic framework

Listed below are the main advantages of the Ionic framework:

The following list features the disadvantages of the Ionic framework:

Visual Studio Code is an open source and free source code editor developed by Microsoft for macOS, Windows and Linux. It is a lightweight editor.

Customised features are available in VS Code. Depending on your requirements, you can change the VS Code features. Visual Studio is a completely different product from VS Code. Developers use VS Code because it is user friendly, easy to debug, provides project templates, databases and third-party plugins.

Postman is a Google Chrome app that interacts with HTTP APIs. Postman has a user-friendly GUI for showing requests, as well as accurate responses like the Live API response. Postman is specially used for testing purposes.

Now, let’s look at some good reasons to use Postman.

Jenkins is an automation server. After Jenkins 2.0, Jenkins is no longer just a CI server. Now, there is dedicated focus on CI as well as CD. Some of its features include the following:

Jenkins has more than 155,000 active installations and approximately 1.5 million users. It is a multiple-award-winning open source project.

There is a Slack app for Android and iOS devices, a Slack dashboard application for computers, and a Web app to use Slack effectively when on the go.