The partnership aims to advance the development of a truly interoperable solution set for IoT, Edge and Cloud integration 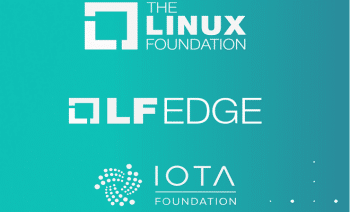 IOTA is the first open-source distributed ledger that is being built to power the future of the Internet of Things (IoT) with feeless microtransactions and data integrity for machines.

The LF Edge framework has been embraced as the leading open source stack for IoT, Edge, and Cloud interoperability, but there has been a key piece of this puzzle missing. Distributed Ledger Technologies. We have joined the Linux Foundation to help complete their stack of technologies to advance their development of a truly interoperable solution set for IoT, Edge and Cloud integration – Mathew Yarger, Public Sector Product Owner at the IOTA Foundation, writes in a blog post.

What will be coming of this collaboration?

Initially, IOTA Foundation’s primary focus will be on integration into EdgeX Foundry, where it will be working with other members to show the power of the IOTA protocol towards securing, scaling and allowing for increased interoperability in the Edge and Fog area of the stack. EdgeX Foundry is focused on the Industrial IoT Edge.

“We aim for it to be one of the first open source contributions we make to the LF Edge stack to allow for this interoperability and data sharing capability for both permissioned and permissionless use cases moving forward,” Yarger writes.

Arpit Joshipura, General Manager, Networking, Edge and IoT, the Linux Foundation, commented: “We’re excited to be integrating more closely with the IOTA Foundation and are eager to further open innovation and leveraging the unique capabilities that IOTA brings to the LF Edge table.”

IOTA Foundation terms this partnership as its first step towards open collaboration. “This is our first step, but it’s not our only or last step,” Yarger writes.