Among container orchestration technologies, Kubernetes and Amazon ECS lead the pack. However, on what basis should systems administrators choose one over the other? This article will help them make an informed choice.

Shipping containers are regarded as ubiquitous and standardised. They can be accessible from anywhere in the world by following simple procedures. Software containers operate in somewhat a similar manner. Packing the software container involves defining what is required for your application to work. This includes the operating system, library files, configuration files, application binaries and other components of the technology stack.

A container image is used to create containers that can operate in almost any environment, from standard desktop systems to data centres and even on the cloud. Containers are regarded as highly efficient as many of them can run on the same machine allowing full resource utilisation. Container technology was introduced in the late 1970s but became extremely popular only when Docker was introduced in 2013. Since then, container technology has drastically changed the DevOps landscape and the way applications are developed, shipped and run.

The importance of containers

Container orchestration is defined as the process of automated arrangement, coordination and the management of computer systems, middleware and services.

Container orchestration is linked with service-oriented architecture, virtualisation, provisioning, converged infrastructure and dynamic data centres. It is regarded as the process of aligning the business requests with the applications, data and infrastructure. It defines the policies and service levels via automated workflows, provisioning and change management. It creates a powerful application-aligned infrastructure that can be scaled up or down depending on application needs. Orchestration reduces the time and effort for deploying multiple instances of a single application.

Container orchestration tools offer powerful and effective solutions for creating, managing and updating multiple containers in coordination across multiple hosts. Orchestration allows the users to share data between services and process tasks in an asynchronous fashion.

Consider an example in which IT software infrastructure comprises Apache, PHP, Python, Ruby, Node.js and React apps running on a few containers which are connected to a replicated DB. In such a case, there is no requirement for container orchestration. But when the application keeps on growing rapidly with time, it requires massive resources in terms of CPU, RAM, etc. That’s when it needs to be split into smaller chunks, where every chunk is responsible for an independent task, maintained by respective teams like microservices. So, now there is a requirement for a caching layer, as well as a queuing system to increase performance, effectively synchronise the tasks and share data successfully among the services.

Container orchestration provides effective and powerful solutions to meet various demands. There are many players in the market like Kubernetes, AWS ECS and Docker Swarm. So, it is important to compare the performance of Kubernetes against that of AWS ECS to assist IT sysadmins in selecting the better of the two.

Kubernetes is an open source platform designed by Google and now maintained by the Cloud Native Computing Foundation. It is regarded as the most feature-rich and widely used orchestration framework for automation, scaling and operating application containers across clusters of hosts, and it provides container-centric infrastructure. It works with a range of container tools including Docker.

Kubernetes is designed to work in multiple environments including bare metal, on-premise VMs and public clouds.

With Kubernetes, one can perform the following operations:

The following are the components of Kubernetes’ architecture.

It allows users to launch and stop container-based applications with simple API calls, and to create state-of-art clusters via a centralised service. Amazon ECS also helps users to schedule the placement of containers across the cluster depending on resource needs, isolation policies and availability requirements. 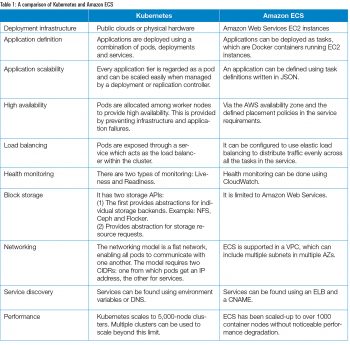 Amazon ECS can be used to create a consistent deployment and build experience. It can manage and scale batch and extract-transform-load (ETL) workloads, and build sophisticated application architectures on a microservices model. Its main features are listed below.

The AWS services that are used with ECS are: