Open source is mainly used in enterprises for IT infrastructure modernization. Innovation and security rank among the top benefits of using enterprise open source solutions. 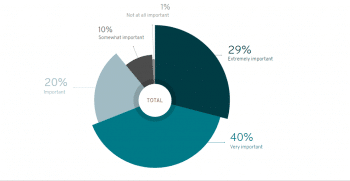 Almost one in three IT leaders say open source is very important to the enterprise while only 1 per cent dismisses it altogether, according to a Red Hat survey.

The company questioned 950 IT leaders to better understand the unique role of enterprise open source, and 29 per cent of the respondents agreed that use of open source is extremely important for enterprises.

The survey found that open source use in enterprises has increased 68 per cent in the last 12 months. Open source is also increasingly used in categories that have historically been more associated with proprietary applications, it said.

Open source in use across the organization

Open source is used almost equally in website development (45 per cent), big data and analytics (42 per cent), cloud management tools (43 per cent), databases (41 per cent) and security (42 per cent).